BLU VIVO Air, Is the Best Smartphone Out in the US?

Absolutely! If you are looking for something not fancy and pricey yet sleek. BLU VIVO Air is only priced at $199 USD. And one good more thing is you will not be obligated for any contracts. BLU VIVO Air not only cheap but is also an unlocked Android Kitkat smartphone. And as it stands now in the smartphone bandwagon, BLU VIVO Air is the thinnest phone in the US. Just with that we are saying that BLU VIVO Air can be the next cheap and unlocked best smartphone out in the US.

BLU VIVO Air recently came out of the smartphone market last January 2015. Many are already enjoying this budget cost, mid-range Android smartphone. Vivo Air is the the 5th generation of the rising Blu VIVO bandwagon in the US. The latest flagship unlocked smartphone of Miami’s pride was unveiled in the recent International CES in Las Vegas, January 6-9, 2015. 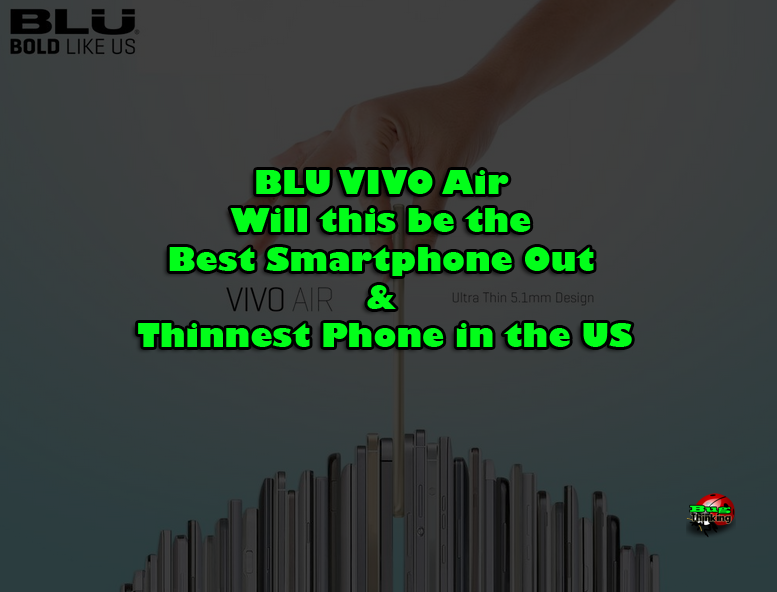 What is it to brag with BLU VIVO Air?

Most people only knew a handful of smartphones that is available for the taking. There’s Samsung, HTC, Nexus, Blackberry, iPhone and a few more. But this is because these smartphones became so popular because of the PRs, advertisements, and word of mouth. We tend to ignore small local players in the market. So that is why not everybody knew about BLU VIVO. But with the latest BLU VIVO Air, I think there a high probability that it can become the best smartphone out in the US. Especially if your looking for a decent and worth it Android smartphone that is not expensive.

The Price. As mentioned, BLU VIVO Air will only cost you $199 unlike those of Samsung Galaxy Note 4 from AT&T which will snatch $825.99 (regular price) from your wallet. But not only that, VIVO Air is unlocked so you don’t have to worry about those contracts. You can manage your own usage, especially data consumption.

“BLU is dedicated to delivering choices to the consumer, driven by the demand for great looking smartphones that can do amazing things, priced for everyone.”

The Body. Surprisingly, with a cheap price comes with a Super AMOLED display technology. And it sports Corning Gorilla Glass 3 unlike some cheap phones which uses acrylic plastic which looks like a glass but not. The VIVO Air’s dimension is 139.8mm x 67.4mm x 5.1mm and weighs around 100g. This is the reason why it holds the title “Thinnest Phone in the US”. Also with its weight the phone is lightest in America as compared to the other leading branded Android smartphones.

Also, the body of BLU VIVO Air’s flat structure is so noticeable especially if you let it lie in your table along with other smartphones. Unlike other Android smartphones with that plastic feeling body, VIVO Air is made of solid block of aluminum magnesium alloy. And to add more protection, the front and back is covered with Corning Gorilla glass 3 shell.

The volume rocker and power button is situated in the left side of the phone. They are the only thing that protrudes on the left side of the phone. On the right-side is the SIM card slot. Nothing on the top side and on the bottom you will see the micro-USB 2.0 slot, microphone and head-phone jack. At the back is the 3264x2448 pixels autofocus 8MP camera and LED flash while on the front is the usual sensor, earpiece, and the 5MP front-facing camera. Also you will see the usual 3 capacitive button below the 4.8 inches AMOLED capacitive touchscreen with 720x1280 pixels display.

The battery VIVO Air is using is Li-Ion 2100mAh battery, let’s see how it drains in real action.

Inside the VIVO Air. It is powered by Mediatek MT6592 with Octa-Core Cortex-A7 processor at 1.7GHz, Mali-450MP4 GPU. The phone also sports a 16GB ROM and 1GB RAM. Also VIVO Air is using the latest CNC and antenna technologies. The signal or network, it can work on GSM, HSDPA, HSPA, GPRS, and Edge. Unfortunately, no LTE.

This phone is powered by Android Kitkat v4.4.2 as its operating system. However, there is no indication that the operating system can be upgraded to Lollipop version in the near future.

Unfortunately, there are downsides too with BLU VIVO Air

Now with the downsides of this thinnest phone in the US. We’ve seen almost all of the good side of VIVO Air but like any other smartphones there are things that some of us will not like.

One thing you will notice with this Android smartphone is the launcher. First, there’s no app drawer like most Android smartphones. It’s more like iPhone where the apps are already there when you open it. Another is the multi-tasking button, you will notice that once you open an app and press the multi-tasking capacitive button then nothing happens. A solution for this is for you to download and install 3rd-party Android launcher on Google Play.

No LTE for you. Sorry guys if you are currently enjoying LTE connection in your area and you are looking forward that you can do the same thing on VIVO Air. This smartphone can only go as far as HSPA. But I guess that wouldn’t be a big deal for some.

You are stuck with limited memory storage. It is not expandable and you can’t add more. Well, there’s nothing to say about this really. That’s the design of VIVO Air and we can only wish for more. But if the manufacturer could have added the capability to expand the memory then it’s another plus for VIVO.

Well, if you don’t have the money to spend for high-end and popular smartphone then BLU VIVO Air isn’t that bad. For a price of $199 and unlocked, then it is already a good deal. But I wouldn’t be in the position to say really that this phone can be the best smartphone out in the US. Yes, it could be the thinnest phone in the US but not the best. That is if we’re talking about Android smartphones in general. But if we are to compare this among low to mid range Android smartphone then it is possible to get the title.

By the way, for those Antutu lovers you will be happy to say that BLU boast that VIVO Air can score as far as and more than 30,000.

You can check the 16min BLU VIVO Air review by Tim Schofield/QbKing77 on YouTube below.

Blu Vivo Air Review: Thinnest Phone in the US for $199

Will you bet on BLU VIVO Air and buy one for yourself?