Believe it or not, secondhand vapor smoke from e-cigarette is not harmful at all. Vaping is the most commonly term now used for puffing e-cigarettes and emitting cloud-ish smoke. An exaggerated way of smoking if you ask me. But most people are annoyed and worried at the same time because of the thought that secondary vapor smoke is bad for our health. This is because our mind tells us that. And you can’t blame them because not everyone knows. But with this study done by Dr. Michael Siegel, public health expert, might change the way you perceive vapor smoke. California Department of Health, through Dr. Siegel, did an air sampling to a non-ventilated small vape shop where there were employees and 13 customers enclosed to that small space. They were actively vaping, so imagine how that shop would look like with all those cloud smoke from their e-cigarettes. I bet visibility is almost down to zero! Surely, most of those who are not used to e-cigarette vape smoke might think that these guys inside might die either from suffocation or secondhand vapor smoke. 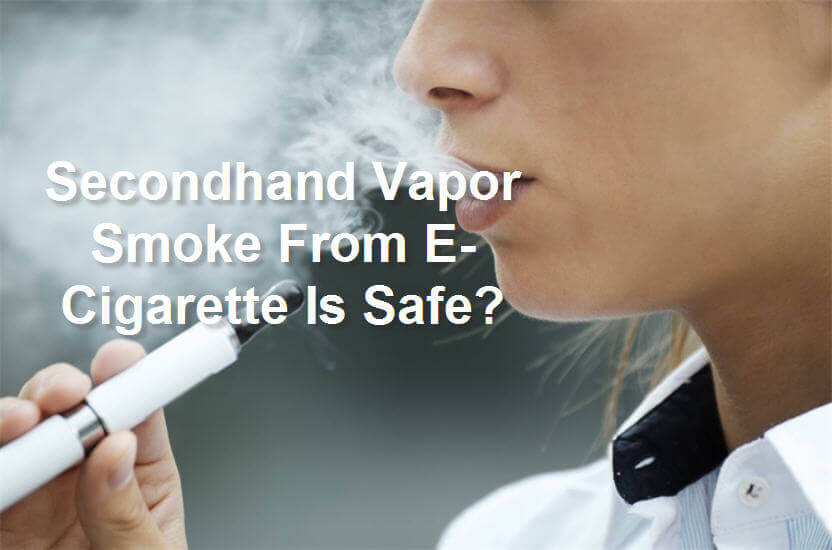 As mentioned, the study was conducted in a relatively small, non-ventilated vape shop with employees and 13 customers vaping constantly. There is a very high-level of exposure and possibility of inhaling the vape clouds or secondary vapor smokes. But the results shows no danger being exposed. There are no hazardous chemicals found in the vape clouds or smoke. Dr. Michael Siegel said:

“This study, although conducted under very high exposure conditions in a small, non-ventilated vape shop with many employees and customers vaping and clouds of vapor visible, did not document any dangerous levels of exposure to any hazardous chemical. – Dr. Michael Siegel”

So, what was found in the air sampling? Or what was the objective of the test against the vapor smoke or vape clouds?

According to National Cancer Institute:

“Formaldehyde is a colorless, flammable, strong-smelling chemical that is used in building materials and to produce many household products. It is used in pressed-wood products, such as particleboard, plywood, and fiberboard; glues and adhesives; permanent-press fabrics; paper product coatings; and certain insulation materials. In addition, formaldehyde is commonly used as an industrial fungicide, germicide, and disinfectant, and as a preservative in mortuaries and medical laboratories. Formaldehyde also occurs naturally in the environment. It is produced in small amounts by most living organisms as part of normal metabolic processes.”

“This study, although conducted under very high exposure conditions in a small, non-ventilated vape shop with many employees and customers vaping and clouds of vapor visible, did not document any dangerous levels of exposure to any hazardous chemical. Nicotine exposure was essentially non-existent. Formaldehyde exposure was no different than in many indoor and outdoor environments at baseline. Acetone, acetoin, other aldehydes, toluene, benzene, and xylene were not detected. Chemicals that have been associated with “popcorn lung” were also not detected by the standard method.”

At the end of the day, it is still your decision

Yes, you own your body which means no one is forcing you to believe or feel what is better for your health. And no one really knows yet the long-term effect in our health of using e-cigarettes as either cigarette or tobacco cessation or using it as long-term smoking alternative. This is mainly because, e-cigarette is still young and is only growing popular – but not yet fully accepted by most smokers. And this is why on-going studies are being done by our medical experts. And so far, relying with this new studies, it is still safe to say that there is no hazardous effects in secondary vapor smoke.