Joyetech eGrip V2 OLED 20W was my first vape electronic cigarette (also known as e-cigarette, e-cig, electronic vape, e-vape) I bought here in Shanghai, China. I was quite hesitant at first to buy this Joyetech eGrip V2 e-cigarette because I already had one e-cigarette back in Manila. I bought my first e-cigarette a week before I left. And I don’t want to spend money for another e-cigarette just to satisfy my cravings for nicotine substance. However, since I will be spending more than 3 months here in China and I am quite concern about my health – I ended up buying one for myself. All thanks to my Russian friend’s recommendation. And so, both of us bought ourselves the black version of Joyetech eGrip V2 OLED.

Back in the days, I told myself that I will not cling to cigarette cravings after my mentor at work encouraged me to lit one stick whenever I am under pressured. I started with 2 sticks a day and ended up a pack in a day. I can take even more when drinking in a bar. I know, it’s something that I shouldn’t be proud of – and I am not. Well in all fairness, with each cigarette stick I take makes me feel relax and happy. But of course, everything that’s too much has its bad effects. And those bad effects does not only affects me but also those people around me. We call them second-hand smokers. I am not growing any younger too, so I told myself that sooner or later I needed to quit. Quitting from any obsession is very hard. It takes a lot of courage, discipline and dedication to achieve it. And trying this Joyetech eGrip V2 could be my first step (because I seldom used my old one back in Manila).

I didn’t actually read any feedbacks neither reviews of Joyetech eGrip V2 before I bought it. I just relied on my friend’s suggestion since he told me that it was kinda known in their country and there had been positive feedbacks. And since I own one now, I think I owe it to the public to share my own review and feedback. It’s been 4 months now since I first bought it from a popular online store here in China called Taobao. So let’s begin. 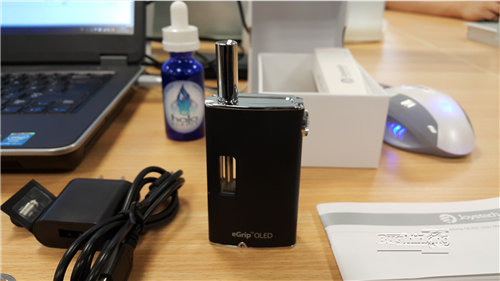 Finally the box was delivered after 3 days of waiting when a Chinese friend of mine ordered Joyetech eGrip V2 OLED from Taobao. Excitement – this was my first feeling and there were so many anticipations when it was first handed over to me. Looking at the packaging – it was nicely done. A friend of mine told me that when it comes to packaging, Chinese are really good at it. Time to open it up!

The first thing I saw inside the Joyetech eGrip V2 OLED’s box was the star of the show – of course. It actually comes in 2 layers inside the box. On the top is the Joyetech eGrip V2 itself – that beautiful black e-cigarette. By the way, there are other colours too aside from black – white, silver, red, purple. Below that first layer are the other stuffs like the mouthpiece, USB cord, power wall adapter, spare atomizer/coil. Instruction manual (in different languages), warranty card, and the key which is also known as the air screw coil tool. And an extra eGrip CS Atomizer Head (1.5Ω resistance).

The Joyetech eGrip V2 OLED is relatively small when compared to other common e-cigarettes you are familiar with. The total dimension of eGrip V2 is 46.4mm X 20.4mm X 99.5mm with the stock mouthpiece or drip tip. However, don’t be deceived with the size of this e-cigarette because you might get surprised. The size might be small and sexy but it weighs more than you’d expect it to be. Pretty sturdy I should say and it seems the manufacturer did a pretty good job putting everything together in one small package. But I bet the wirings inside and the body itself makes it heavy than I expected. I think it’s the battery, it has to be. A battery with 1500mAh capacity could be the main reason.

Using Joyetech eGrip V2 OLED isn’t too complicated. For first timer, I am pretty sure you are fully aware that you need to have at least a bottle of e-Juice with you before you can start using it.

On one side, you will find a locked lid. You just need to unlock and lift the lid to fill your eGrip with e-Juice. There are 2 holes underneath the flap, you can use the larger hole when filling up. You can fill up to 3.6ml of e-Juice inside this small e-cigarette. Possibly that will be enough for your whole day use – or not. Still, it is already a big storage.

Filling the eGrip with e-Juice can sometimes be a challenge for you. Most e-Juice comes out with glass eyedropper. And in most cases the tip of these eyedroppers can be larger than the eGrip’s largest hole. In short, filling the eGrip with liquid can be a little bit messy. If you have a plastic bottle with needle tip or even with containers with needle like tip then transfer your juice there. Not only will you save yourself from cleaning but also save wasting your juice. 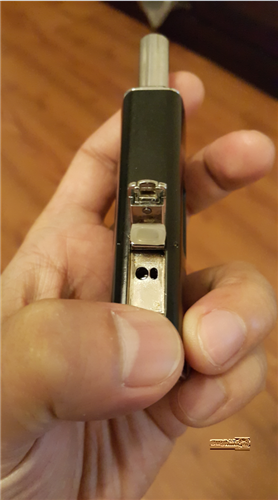 Use the bigger hole to inject the e-Juice

On the other side, you will see two interesting parts. The firing switch with control knob around it and the LED display. Unlike the common e-Cigarettes I see in most stores, with Joyetech eGrip V2 OLED 20W there are 2 firing output modes – Voltage or Wattage modes. To be honest I don’t feel any difference between the 2 for as long as you have calibrated your eGrip based on your personal preference. If I am using the V-mode, I set it to 4.5V while on W-mode I usually switch from 15.5w to 20w. It depends on my e-Juice sometimes, I just don’t like the burning taste that is why sometimes I adjust the VW. Which is the good thing about this Joyetech eGrip V2 OLED. With the OLED display I can see the settings I am using. And whenever I push the fire button, I can monitor how many seconds I am using to burn the e-Juice inside.

The atomizer is located at the bottom. There is a small circular screw at the bottom wherein if you unscrew it (you can use a coin if you lost the screw tool included in the package) you will see the atomizer attached to it. Once you feel that the juice you are smoking is burning already, you can change the atomizer with the spare atomizer head.

The smoke… the cloud…

One of the things I love with Joyetech eGrip V2 OLED is the smoke… literally smoke! Most of the time I puff and puff to create my own personalized cloud with the scent of my favourite e-Juice. I will post a video on how much clouds… I mean smoke whenever I puff as soon as I could but for now, I can assure you it can produce smokes more than your regular cigarette.

Update: Here’s the video I promised.

And in the end…

I must admit, I’ve enjoyed using Joyetech eGrip V2 OLED. But I enjoyed it better after I did a little upgrade. I’ve replaced the stock atomizer base kit with a new eGrip RBA base. With this new eGrip RBA I was able to use 20W at maximum level to produce more smoke.

I only spent at around $50 USD for the Joyetech eGrip V2 OLED 20W with the new eGrip RBA. Not bad at all.

Joyetech eGrip V2 OLED 20W is a very handy yet effective e-Cigarette I found here in Shanghai, China. You should check the reasons why.