In this article we will discuss how to teach Siri to pronounce names correctly. We’ve already covered some tips and tricks with iPhone and now let’s try teaching it’s one of the best feature called Siri.

One of the most prominent features of the iPhone is the AI assistant, Siri. However, there are times when Siri pronounces names incorrectly. This mobile assistant works effectively when calling or sending messages. However, it can also cause frustration when you tell her to message Jackielyn and the AI assistant immediately searches for violins.

Fortunately, there is a workaround to this. You can actually train Siri to pronounce your name or any other names properly. One of Siri’s features is the ability to learn. So, if you want to fix this and know how to teach Siri to pronounce names the right way. Here are some steps.

How to Teach Siri To Pronounce Names Correctly

In order to know how to teach Siri to pronounce names the right way, here are the instructions: 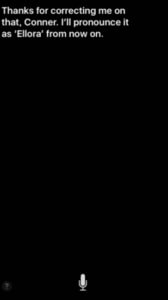 Basically, that’s it. You have now added something new to Siri’s learning database. Try it!