What will you do if you caught your wife cheating, what are you going to do? Especially if you caught them on the act (worse, doing it on your bed!)! Are you going to confront her or both of them? Are you going to just ignore it and forget – which I doubt? Are you calm enough to let them get away with it? Honestly, how are you going to express your ill-feeling towards such situation where you caught your wife cheating against you? Not to mention breaking the vows you both made when you got married – “for better or for worse“. While thinking about it, check out what did this man do to her wife after he caught her cheating. he literally puts red chilli peppers on her wife – down there! 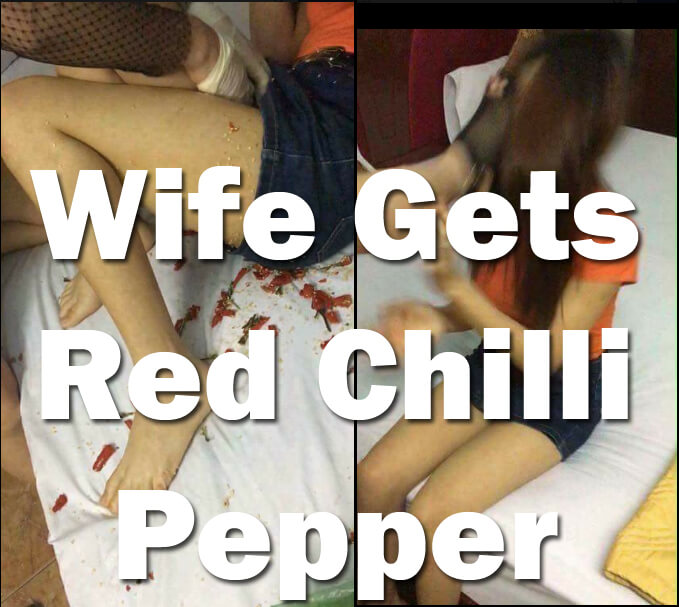 There’s a viral Facebook post from “Kabet” (tagalog word which means mistress) showing 2 pictures of this woman who was said to be the wife. The first picture is showing someone putting red chilli peppers inside her short jean pants. While the other picture shows the same girl literally smacked straight in the face.

Here’s what was posted on that Facebook page. And as of writing this, there’s already 7.3K likes/reactions, 3.3K comments, and 20K shares. And if you will read the comments there (I doubt you will understand if you do not understand Tagalog/Filipino), there have different views about the situation. Some says, the photos were fake. Some pities the woman because for them regardless whether she was caught cheating or misinterpreted cheating – she’s still a person. They feel that she still deserves to be treated as a human being. Some despise the woman and they felt that she deserves to be treated as such.

Here’s my two-cents about these photos whether they’re fake or not. Cheating, in any form or situation is wrong! But hey! We’re human beings and bound to commit mistakes – whether small or big. But as much as possible, really I mean it, try to avoid putting yourself in such a big mess. If your husband-wife relationship is in the rocking boat – talk! But don’t just talk, listen. Try to communicate and understand what’s wrong with your relationship before one of you ends up cheating! Don’t let the fire spread and try to resolve your differences as soon as you feel that things will not go smoothly.